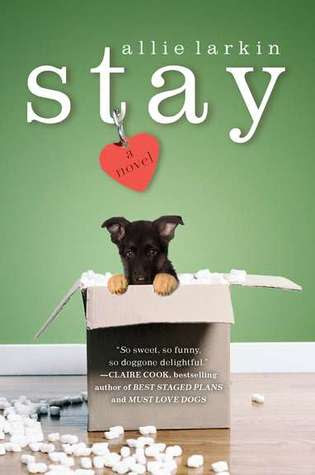 After having to serve as maid of honor in the blessed event, and after a row with Janie's mom Diane - for whom Van's mother worked - Van finds herself in possession of a sizable amount of money and trying to drown her pain in a few too many cocktails... which is how she ends up buying a dog on ebay.

But what she thought was a puppy turns out to be a huge, year old giant named Joe who only understands Slovak and has to have special food made for him.

With entirely too much on her plate - including lingering, unresolved business and resentments with both Janie and Diane, and Peter suddenly needing to call her and talk to her all the time, even while at his honeymoon - Van does not want a giant mess of a dog... but, over time, she comes to realize that Joe might be just what she needed. That and Joe's handsome veterinarian.

Second Glance: I've had Stay in my TBR pile for almost two years and now I feel bad I didn't read it sooner because it was a really sweet story. Van was very likable - even if she needed to learn to say "No" when people where pushing her around - and I LOVED seeing her develop her relationship with Joe. I'm a dog person and the bond that grows between them made my dog-loving heart happy.

And I loved Joe's vet, sure he could be a little thick headed sometimes but he was very nice and once his whole story was out in the open I went "Aww" a few times.

Peter and Janie were very hard to like most of the time but even there, the author managed to pull things together in the end, in a way that felt really organic and appropriate as the two of them and Van had to re-learn how to be friends with each other again and find a more balanced relationship rather than just the two of them leaning on Van all the time.

Peter's aunt - whom Van befriends - was a delight too.

Bottom Line: I really liked Stay. It had it's slow parts and sometimes the characters really pushed my buttons but I liked Ms Larkin's narrative and the story she told. It is more Chick Lit than Contemporary Romance, though, and the big love story here is between Van and Joe.