Book Review: She Who Dares by Jane O'Reilly 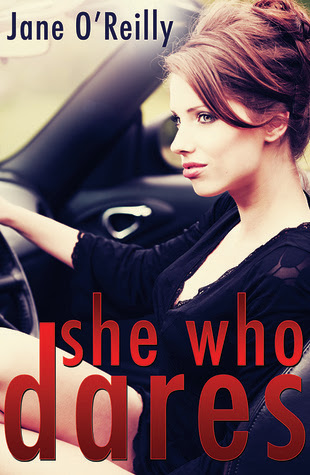 At First Sight: Nic Sinclair has always been the ugly duckling to her step-sister Ella's beautiful swan, but she was content enough with her life owning half of Ella's father's vintage car dealership/restoration garage; handling the mechanical stuff while Ella dealt with sales and business.

Until Ella decided to drop everything, sell her half of the garage and leave Nic in a lurch. Now Nic has a partner she doesn't know and has to enter the town's Misses and Motor's beauty pageant (which Ella has won 3 times before) as the family's representative.

Then, Nic's mysterious new business partner shows up in the form of Sebastian Prince, a famous rally driver recovering from a near fatal crash.

Sebastian dated Ella for a while and was happy to buy her half of business just because it meant he was helping a friend out, it so happened it fit into his plans of convincing his teams psychologist (whom also happens to be his little sister) that he's ready to race again.

He wasn't expecting a less than thrilled Nic as his business partner or the instant attraction they both feel. Sebastian is not a man used to denying himself anything he wants so he is ready to roll it with but Nic might have other plans in mind.

Second Glance: I loved the idea of She Who Dares, since I admit I like Ugly-duckling stories, but the reality of the book was a bit different than expected.

To start with, both Nic and Sebastian have stuff they need to deal with, and they both engage in self-destructive behaviors (to a point).  Nic's self esteem is pretty shot and sometimes it was hard for me to read how low she thought of herself and how bad that made her feel and react. Sebastian has other type of issues, but over all I kind of liked him a bit more.

Sebastian is pretty straight forward and honestly likes Nic, and finds her attractive and can't understand how she doesn't see she is attractive -something that gets old fast, by the way - even if he isn't thrilled that he dated her sister before, he's a lot more open to explore their options.

I do feel like things got wrapped up a bit too neatly and quite abruptly, particularly regarding this thing with Nic, which I won't mention because it is a relatively big spoiler.

Bottom Line: She Who Dares wasn't exactly what I was expecting but it wasn't bad. It was a fairly quick read, but more gloomy than the cover and the official summary would suggest.