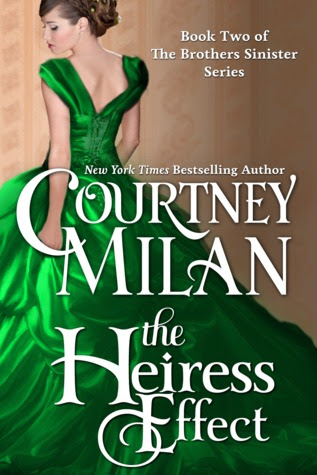 At First Sight: Jane Fairfield goes out of her way to be awful. Most people think she just does it because she's gaudy and garish and has no breeding, just a large fortune; but under all of that there is a lot more but people never look close enough to figure it out... except for Mr. Oliver Marshall.

Oliver grew up a bit on the outs of everything - he went to Eaton and Cambridge but, as the by blow of a duke, he didn't belong there, and still doesn't, no matter how much his brother, the current duke, accepts him and acknowledges him. Oliver knows what's like when people speak behind your back and treat you like you're inferior all the time... and he knows that no matter how much Jane pretends it doesn't matter, it does.

Jane has many secrets, and a pretty powerful reason to be like she is - over the top and loud and honest to the point of being rude sometimes - and it's all getting to her. And she's not sure if Oliver noticing is good or bad.

Second Glance: The Heiress Effect is the second full - length book of the Brothers Sinister series and I think I liked a lot more than the Duchess War.

I loved Jane from the start and when I found out her reasons to do what she did - which are protecting her younger sister Emily, at all costs - that only grew more. She was willing to go at great lengths to make sure Emily was safe and I respect that.

Oliver was a very complex character and he wasn't always easy to like, he makes some questionable choices through out the course of the book, he means well and he's ambitions and that doesn't always produce the best results. He can be very hurtful at times, mostly out of thoughtlessness than out of meanness, and it takes him a while to take stock of what he has traded for his ambitions; but he was all right in the end.

I loved Jane's sister Emily and her whole subplot, which was a happy surprise for me. And I liked Oliver's younger sister Free for the most part (she shall feature in book 4), though it was hard to get there with her. Still something that has to do with the Marshall Siblings and their aunt Freddy made me cry so much.

Oh, and the more I get to know Violet and Sebastian (who will show up in the next book) the more I like them.

Bottom Line:  I liked the Heiress Effect, it was cleverly written and fun to read, I found it a lot more enjoyable than The Duchess war, easier to read and get into. And now I'm REALLY looking forward to the next book The Countess Conspiracy.