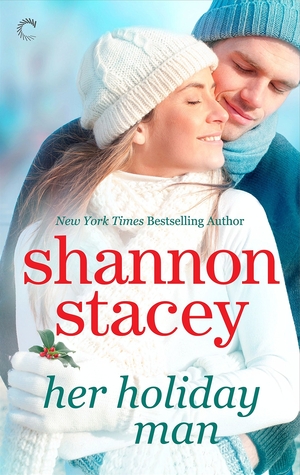 Summary (GoodReads)
Christina Forrester is starting over. After a financial scandal sent her ex-husband to prison, she's left raising her young son without any of the comforts of their old life. Budgets, coupons, lawn care—you name it, she's learning to do it all on her own. Well, almost on her own—she'd be lost without Gail Broughton, the kind widow across the street. But when Gail's son comes home, Christina's vow to never trust a man again is put to the test.

Will Broughton left town because he was tired of being "that poor man" who lost his wife and unborn child in a tragic accident. But years have passed and, with his dad gone and his mom alone, it's time to go home. Only his mother's not alone. She's taken Christina under her wing, and the beautiful and determined single mother awakens something in Will he thought was buried forever.

As Will and Christina are forced to spend more time together, feelings that are more than neighborly grow between them. And with Christmas coming and a child filling both houses with holiday cheer, it becomes nearly impossible not to embrace the joy—and the love—in their lives.

My Thoughts:
It was a lot of fun to jump into this holiday novella - which I should have read way before now but since the weather is keeping pretty chill, I think I'm still in time... sort of - and to met Christina and her son and the new home they made for themselves in this new town.

I loved that, while this was a small-town novella, the town never overpowered the story, it stays small, focused mostly on Will and Christina and how their relationship progresses once he returns to town to keep an eye on his mom, who has befriended Christina and her son.

Both Will and his mother Gail were excellent friends first, before their relationship got complicated. I liked how encouraging was Gail of this new relationship, even when Will was reluctant because of his past and the people he had lost. He wasn't closed up to love though, which was nice.

All in all, it was a sweet novella for any time of the year!!!
By Anonymous 5 comments:

Book Review: The Courage of Cat Campbell by Natasha Lowe 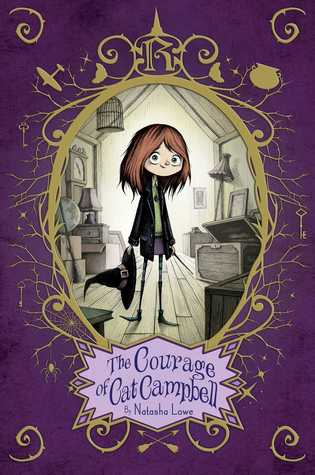 Cat Campbell is a late-blooming witch whose magical abilities are bursting to be mastered in this charming coming-of-age story set in the world of The Power of Poppy Pendle.

Cat Campbell has had magical powers since the day she was born, but she didn’t always know that. Cat’s mother believes magic ruins lives, and even as Cat’s passion for magic grows over the years, no one suspects she has the gift. But she has indeed inherited the coveted magic gene of her famed great-great-grandmother Mabel, a discovery she makes in a most surprising way. Cat is a witch!

And when she comes across a book called The Late Bloomer’s Guide to Magic, she finds the encouragement she needs and spells that work. Then the town of Potts Bottom is threatened by a notoriously feared witch, and Cat has the chance to help her family and town—and to prove herself in the process. Because, as The Late Bloomer’s Guide to Magic proclaims, “believing in your magic and yourself is half the battle.”

The Courage of Cat Campbell was adorable. Cat herself was such an endearing heroine, she loves magic and loves being a witch, even if her own mother is kind of against it, since she, Poppy, believes magic runs life and she much rather Cat became a baker like herself.

Like I said, sweet story. Cat was so very likable, and for me she was the thing that worked the best in the story. The rest, well... I didn't know this was sequel until I had started and I felt like the author often fell back on explaining things that happened in the previous book (Cat's Mom story) and spoiled things a bit.

And at times the writing was a little unfocused, and at such time the book was easy to put down.

But I was glad to have read the book and make it to the end. I liked the style over all and I enjoyed the town a lot, it seemed like another character.
By Anonymous 2 comments:

Summary(Goodreads)
Courtney and Josh are in love and excited to finally compete as skating partners. When they take the ice for their first competition, they want to show everyone, especially Josh's family, they are the perfect pair.

But ice is slippery, and one misstep puts all their dreams in jeopardy. Now they must show each other both their love and their partnership are strong enough to survive.

My Thoughts
I always have so much fun when I revisit this world Jennifer has created. In Losing the Ice, Courtney and Josh are getting ready for their first competition and I thought she did such a good job of capturing how nervous and excited they were and how big a step was for them to start skating together after having had different partners most of their lives.

I liked that and that the author didn't gloss over how hard it for Court and Josh to adapt to each other, and how their love and trust was shaken with the accident - not because it wasn't there but because it was a difficult time and their relationship (on and off the ice) new in many ways.

Also liked seeing Josh's sister again and see her develop as a character a bit more. She might not be happy with all of Josh choices, but she wants him to be happy and she proves that.

All in all I thought it was a good transition between the previous book and what comes next. And it was also fun to catch up with Sergei, Em and their family. I really love that Liza and Courtney are friends and that they support each other, even if Liza wasn't in this book all that much. The twins were super adorbs as usual.

Favorite Quotes (our of order to avoid spoilers):
He smiled and wrapped one arm around me. “This day is my favorite everything.”

“If you weren’t strong, you wouldn’t be here right now, about to compete two months after a terrifying injury. A lot of people wouldn’t come back from that.” I turned his face toward me. “I believe in you, and I believe in us.”
He gazed at me a long minute. “I just want to be the partner you deserve. The man you deserve.”

“This don’t look like Mommy’s mac and cheese,” she said. That’s because Mommy is a gourmet cook who makes the pasta from scratch and grates the cheese herself.
“It’s different, but it’s still yummy,” I said.
She wrinkled her nose and peered closer at the bowl. “Why it orange?”

This review is part of the Losing the Ice Tour

About the Author
Jennifer Comeaux is a tax accountant by day, writer by night. There aren’t any ice rinks near her home in south Louisiana, but she’s a die-hard figure skating fan and loves to write stories of romance set in the world of competitive skating.

One of her favorite pastimes is traveling to competitions, where she can experience all the glitz and drama that inspire her writing. Jennifer loves to hear from readers!
jennifercomeaux.blogspot.com | TWITTER | FACEBOOK

a Rafflecopter giveaway
By Anonymous 4 comments: 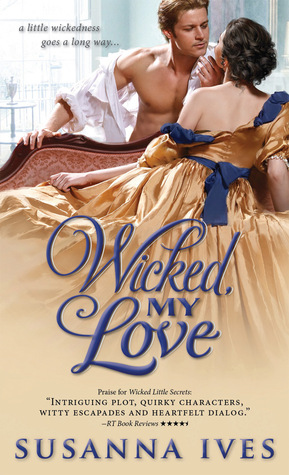 Summary (GoodReads)
A smooth-talking rogue and a dowdy financial genius...

Handsome, silver-tongued politician Lord Randall doesn't get along with his bank partner, the financially brilliant but hopelessly frumpish Isabella St. Vincent. Ever since she was his childhood nemesis, he's tried—and failed—to get the better of her.

When both Randall's political career and their mutual bank interests are threatened by scandal, he has to admit he needs Isabella's help. They set off on a madcap scheme to set matters right. With her wits and his charm, what could possibly go wrong? Only a volatile mutual attraction that's catching them completely off guard...

My Thoughts:
I really liked the idea of Wicked, My Love. The fact that Isabella was a math genius and basically ran the bank herself while Randall was off doing his political stuff, it sounded like a lot of fun. And I appreciated that she actually wanted to talk about stocks and financial stuff all the time. But... the rest of the story fell a little flat.

I never liked Randall all that much, plus it didn't make much sense to me that he was always slipping into this other persona of "Randy" whenever he and Isabella had to be 'undercover'. Randy was very, very crass, not the kind of person a proper and snobbish politician would assume. Or at least, it didn't fell organic to me.

Isabella was starry eyed to the point of being foolish, but she was likable most of the time otherwise; and I did feel for her and how insecure she felt because she never managed to please her father. But I didn't believe her with Randall, didn't believe they were meant to be and that's kind of essential as this was a romance.

Also, the names the author gave the different places Randall and Isabella visited? I think she was trying to be clever with her world play but it sounded kind of ridiculous.
By Anonymous 4 comments:

Book Review: What a Lady Demands by Ashlyn Macnamara 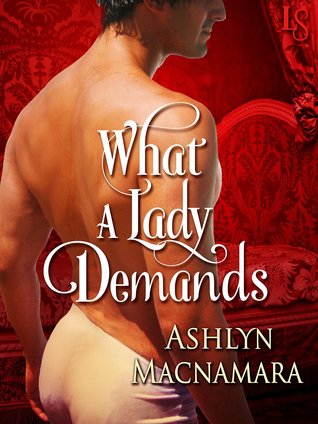 Summary (GoodReads)
Viscount Lindenhurst cannot seem to find a governess who meets his impossible standards—until Cecelia Sanford becomes the first woman to interrupt the widower’s brooding in years. Lind had returned home from the Napoleonic wars, broken in body and soul and longing for his wife’s embrace, only to find her changed.

Before they could reconcile, an accident struck their son and claimed her life. Now enter Cecelia, with her soft curves and sharp tongue—a tempting distraction, it is true, but not a welcome one.

Past the usual marrying age and haunted by a scandal of her own, Cecelia soon finds herself caring for both the child and the man. The viscount is brittle and even abrupt at times, yet she cannot deny the attraction that stirs her body in his presence.

Moved by the deep sense of abandonment that tortures his soul, Cecelia aches to fully awaken Lind’s heart from its rancorous slumber—if she can just keep their pasts from destroying a second chance at love.

My Thoughts:
Similarly than with What a Lady Craves, What a Lady Demands left me a little cold because once again we are dealing with flimsy reasoning and an unlikable hero. Cecelia is not prepared, at all, to be a governess, but she run off from her brother to do just that - all because of a scandal they take forever to explain and that doesn't make much sense - and though she's nice to the kid and the kid likes her, she still is very unorthodox and it makes no sense that Lind would have hired her.

Lind is full of resentments and guilt and he takes them out on the kid, that he is out for vengeance is understandable, but he never stops to see that he has gone so far that he's hurting his son who really just wants his father's approval.

So, again, not someone that was easy to like. And his actions didn't make much sense, he was very hot and cold with everyone around him and I don't like that in a romance hero. I did find it a little more interesting than the previous book, which is something.

But, still, not something I would like to revisit soon.