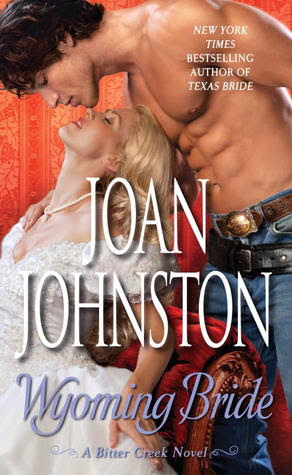 Hannah was never as self-sacrificing as their older sister Miranda, but she seems unable to say no to Josie and so gives up on her dreams of a prince to sweep her off her feet and agrees to marry Mr. McMurtry (a middle-aged Irishman who agrees to take her and her sisters with him to Wyoming, where he expects to open a dry goods store).

Mr. McMutry is not the husband of Hannah's dreams but he's tolerant and patient, even after Hetty's behavior gets them kicked off the wagon train and they are forced to make their own way. Until he dies, leaving Hannah pregnant and in the middle of nowhere.

Flint Creed was riding hard, trying to cool off his head after leaving his younger brother Ransom's engagement party to Miss Emmaline Simmons, the girl Flint was in love with in secret but who chose his brother instead. Flint knows things will get complicated once Ransom marries her and they have to live all together in the same house, and he quickly reaches the conclusion that he needs to find a wife of his own.

And, as luck would have it, he finds Hannah in the prairie, alone, thirsty and sunburned... and with no memory of what happened to her sisters after Mr. McMurtry's death.

Second Glance: I got Wyoming Bride via NetGalley, and I was hoping I would like it better than Texas Bride, the previous book in the series. And for the most part, I did. Hannah was likable enough as was Emmaline, Ransom and even Flint; and the story is pretty evenly distributed between the two couples once Hannah meets them.

But I had serious problems with the beginning of the story because quite frankly Hetty and Josie were just plain annoying and vexing. Hannah sacrificed herself to keep them safe but they are very ungrateful, and even after Hannah warns them to behave or they'll get kicked out of the wagon train, they don't care and do as their please: Josie spends all her time reading and not doing her part of the chores, and Hetty just flirts with two men, trying to get one to propose.

Once they were out of the picture, the story became a lot more tolerable. Even if Flint was a little too obsessed with Emmaline at first and remains so for a big chunk of the book, Hannah sometimes has moments of woe-is-me but it's not overdone and annoying, and she does have a bit of a spine, which is nice.

The story between Emmaline and Ransom went a little in circles but it also showcased some very real issues about life back in those days - Emmaline has a near-paralyzing fear of getting pregnant since her mother died during childbirth, and there is something going on with this guy who is trying to ruin every ranch in sight to become a powerful land-owner.

Bottom Line: All in all, Wyoming Bride (to be released January 1st, 2013) was a better read than the previous book in the series but it wasn't perfect by any means. Still, I find Ms Johnston's style oddly compelling and once I get into the story I can't stop reading, which is good. Plus, I wonder if she'll be able to redeem Hetty and Josie in their books, so I'm quite likely to read those books as well.