Book Review: Little Women and Me by Lauren Baratz-Logsted 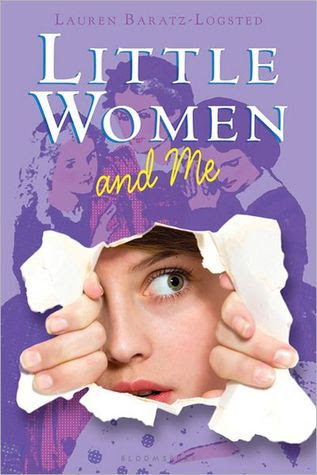 At First Sight: Emily March hates being the middle sister, and she particularly hates that her crush went from liking her older sister Charlotte to liking her younger sister Anne in the blink of an eye without ever turning to look at her.

Then, an english assignment gets her thinking about what would she change in a book - any book - and Emily turns to Little Women, and before she knows it she finds herself inside the book as the previously-unheard-of fifth March sister.

Suddenly, she's seeing the March's sisters lives up close and finally has the chance to change things.

Second Glance: I wanted to read Little Women and Me because I love Little Women and because I liked The Education of Bet by the same author, sadly, this one wasn't as much of a winner. The writing is quite similar - mostly light-hearted and fun - but my problem was that I didn't like Emily very much.

She has jealousy issues and though I get that situations aren't often fair to her, she comes off as annoying and petty more often than not (at least to me), and I don't think she fully learned her lesson by the end (but more on that later).

I did like going through Little Women, there are parts of that book that I can recite from memory, and I admit that re-writing Little Women is one of those ideas I pet in my head when I can't sleep at night. So I understand the appeal of the story, I just don't think it had the best execution possible, mostly because Emily wasn't very sympathetic.

Then, the ending was so abrupt that I felt like the author ran out of page time, and I barely liked Emily a little better by then. She does do the right thing in the end, but it wasn't enough for me somehow because it kind of felt like it came out of nowhere. And more explanation about why things happened would have been nice too.