At the Movies: Christmas With Holly 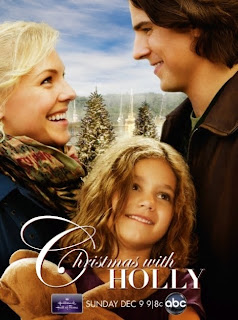 After being left at the altar, Maggie Conway decides she needs a plan B for her life and eventually decides to move to Friday Harbor - a town she visited often as a child - to open a toy shop and start over, finally doing what she always wanted to do.

Following the death of his sister, Mark Nagle found himself responsible for his six-year old niece Holly, who hasn't spoken a word since her mother died.

Unable to make a go of things in Seattle - where Holly and her mom Victoria lived - Mark moves them back to Friday Harbor and into his brother Scott's house (where their brother Alex is currently living as well).

None of them really knows how to deal with a 6 year old girl, but they try their best, often stumbling in the process. Maggie and Mark keep running into each other around town both because Holly is very drawn to Maggie's store and because they are attracted to each other.

Okay, sorry for the choppy summary, I know it's not my best work but that really is the basis of Christmas With Holly, which is based on Christmas Eve at Friday Harbor by Lisa Kleypas (A novella that launched her Friday Harbor series).

While they are several differences between the book and the movie, I found that I liked Christmas with Holly quite a bit. It's a lot more family oriented that the book, and there isn't quite as much romance (and there wasn't THAT much romance in the original book to start with, actually), but it works. The central theme of the book was still there - starting over after life deals you a shitty hand - even if it doesn't go to as dark a place as the book does.

I liked that the relationship between the Nagle brothers was still complicated, even if it wasn't so dark, they were pretty independent and kind of each did his own thing, up until Holly moved in and made them a family. What I don't get is why they changed their last name from Nolan (from the book) to Nagle (in the movie).

Bottom line, I think haters are gonna hate and disair of the changes, personally, I didn't mind them, Christmas with Holly was what I expect of a Hallmark movie and it was good. I'll probably even watch it again sometime. So, I give it a C+ and it's not a bad thing, it was a pleasant, sweet movie, perfect to watch at home.