DNF Review: The Academy: Game On by Monica Seles and James LaRosa 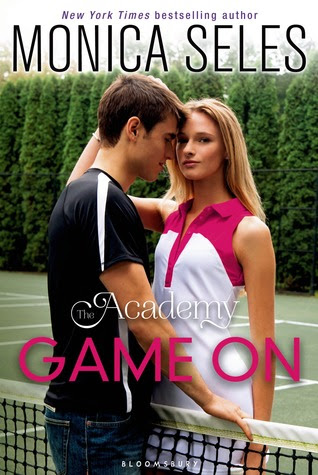 The Academy is an International Sports Mecca for teen athletes of all sports. There are only two ways in. Deep pockets or enough talent to score a scholarship.

Young tennis star Maya's dreams have finally come true when she earns a scholarship to The Academy. Plucked from her small town, Maya moves to the sports training facility/boarding school to (hopefully) start the beginning of her pro career. But Maya's fantasy of The Academy doesn't quite match the reality. Because where there are hot, talented teens, there's a lot of drama. Meet the players:

Cleo: Maya's rebel/punk roommate who is nearing the top of the golf world.
Renee: The gorgeous swimmer with enough money to buy her way into The Academy.
Nicole: A tennis star who feels threatened by Maya (but she'd never admit it).
Travis: The son of The Academy owner--perfectly groomed to be the next NFL star.
Jake: Travis' younger brother--the bad boy to his brother's good.

My Thoughts:
I don't even know where to start with the Academy, so I'll just start with the most obvious things: It reads and feels fake. And, save for maybe Renee (who isn't around nearly enough, but we'll back to that later), it has no likable, endearing, engaging or worth-rooting-for-characters, not even the "villains".

The Academy is supposed to be this super awesome place part boarding school, part high performance sports training facility. Everyone who goes there is supposed to be the next big thing to happen in their respective sport, or they have enough money to buy their way in, which is kind of ridiculous on the face of it since in the world of the Academy everyone who is talented is also super rich, except for the poor little scholarship students, but not even they take it seriously enough even though they say they do.

Maya is the new scholarship student and from the start she's awestruck by the Academy - which sounds more like a spa than any school I've ever heard of - where none of these supposedly super competitive athletes ever do any training other than run a few laps every once in a while.

This includes Maya who is supposed to be on a trial period at school but who spends most of her time hearing her roommate Cleo bitch about something or other, worshiping the obviously fake and mean Nicole King (who almost gets her expelled from the Academy in her second day) and alternatively drooling over brothers Travis and Jake without ever being clear why she likes them other than because they are hot and rich and popular (and that is the extent of their personalities.).

The one exception, somewhat is Renee - the resident dumb, rich girl that Maya befriends early on and then proceeds to take advantage of and ignore when its convenient. I know more about Renee's background from her first interaction with Maya than about any of the other characters by the point I stopped reading the book around page 100. A lot of it is exposition - Renee basically says "I'm a poor little rich girl, and my parents don't love me" and yes it is cliched, but at least Renee was likable.

No one else was.

There was also slut shamming in this book, courtesy of Cleo who has an opinion about everyone she doesn't like and often criticizes them even though she doesn't know them, like, at all.

Anyway, I made it to page 100 before I gave up, not because they book was any good - I stopped caring around page 50 when the first overt slut shamming happens - but because I kept playing a game of "Oh, this sounds like that bit of Mean Girls/Insert Teenage Movie Here" with myself.

I don't think The Academy even gets the sports side of it right (or at least it doesn't sound like it) and it should because it was written by Monica Freaking Seles whom, in case you are too young to remember, is a legendary tenis player, often considered one of the best in history.

To close, The Academy was a mess of overly-broad, archetypal and bland characters, slow as hell pacing and a plot based on worship of the rich. And it's boring to boot.

---
* Can't be bothered to write my own summary.
** This book was provided by the publisher via Net Galley in exchange of an honest review.
By Anonymous