Book Review: Covet Thy Neighbor by L. A. Witt 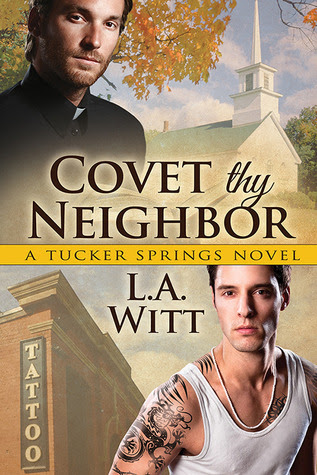 At First Sight: Ever since he came out to his ultra conservative christian parents and was shunned because of it, tattoo artist Seth Wheeler has stayed far away from religious people in general and christians in particular.

Until Darren Romero moved across the hall from him. Darren who is funny, and nice and easy to talk to... and who also happens to be the new youth pastor at the local church.

Now, Seth doesn't know what to do, Darren is the person he has been most attracted to in years, maybe ever, and he seems to be just as into him.

But there is the issue of their respective beliefs and of the fears and worries they each have because of the lives they have lead.

Second Glance: I really liked Covet Thy Neighbor. First of all, I'm going to come out and say that if you are worried this book was going to turn out preachy or hating on grays or christians, well, you can rest assured that it doesn't.

Even though Seth's beliefs are pretty extreme on the religion front because of what he went through with his family, he's not annoying about it, and Darren is someone that's pretty open to dialogue and who doesn't try to cram his beliefs down anyone's throat.

This struggle, however, does take a big chunk of the plot, it's not exactly a complaint and I'm glad they didn't swept it under a rug, but yeah, sometimes I felt like other aspects of their relationship weren't as well explored. And I also felt like I got to know Seth a lot more, since he's the narrator and I would have liked to learn more about Darren.

On the other hand, the cast of characters for Covet Thy Neighbor was very small so Darren and Seth do spend a lot of time together, which is always a plus for a romance novel. And they are sweet together, and make sense.

My only real complain about the book is that it was a bit on the short side, but other than that, I had lots of fun reading it. And it was nice to be back in Tucker Springs.

Bottom Line: Covet Thy Neighbor was a fun book, the main characters were interesting and likable, it was fun seeing them get together and had an interesting perspective and something to say about love and religion and prejudice, without being a dense book.

Review copy provided by the publisher, via Net Galley.
By Anonymous