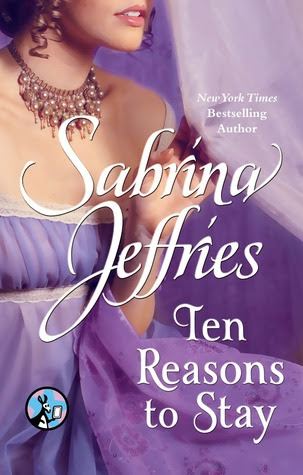 Well, my peeps, it had been a long while since I really read a Sabrina Jeffries book, mostly because by the time I was introduced to her stories, her School for Heiresses Series was well on the way and though I was intrigued by the idea of it, I just never got around picking up the series.

Enter Ten Reasons to Stay, which is set in the same timeline of The School for Heiresses - in fact, it was previously published on an anthology by the same name sometime before now, when it's being released as a e-book novella.

The story goes like this: Colin Hunt, the new Earl of Monteith was just about to retire after his first day in his new home when he noticed someone was sneaking into his stables. Not one to let others take what's his, Colin rushed out to caught a thief but found Miss Eliza Crenshawe instead.

Badly disguised as a boy, Eliza was trying to escape her Uncle and guardian, and his plans to wed her to a friend of his that she had never met before. She hadn't planned on Colin being in residence, but now he's one more thing that he needs to deal with. On the other hand, he might be able to assit her... if she can convince him the story she's telling is the truth, much as it sounds like a gothic novel.

Basically, the story takes place over the course of two days, during which Colin and Eliza fall in love with each other and deal with their fears and misconceptions.

It's a very quick read (about 90 pages or so) and its fun. Ms Jeffries has a knack for writing likable characters, even when they aren't as well developed and the story moves entirely too fast, but for a novella it works okay.