Book Tour: Fighting for the Edge by Jennifer Comeaux 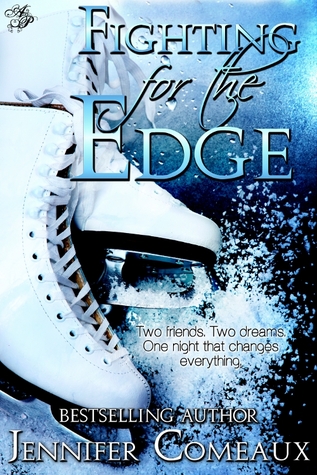 At First Sight: Emily is living her dream, she's one half of one of the top rated pairs skating teams and has a great partner in Chris (who keeps her calm during the competitions, something she never managed to do before pairing with him), and is married to her handsome coach Sergei and has a real shot at winning in the Torino Olympics.

Aubrey is also living the dream, she has a great partner in Nick, and great coaches and she's one half of the top rated US ice dance team. If it weren't for an ill advised one-night stand with a Canadian skater - who now won't leave her alone - her life would be awesome.

Until their skating ring is destroyed during a freak snow storm, and both Audrey and Emily (and their respective teams) are forced to decamp to Boston as they get ready for nationals and the Olympics.

But with their last chance at Olympic Glory in sight, life is not done sending them curve balls.

Second Glance: Fighting for the Edge is the last book in the Edge trilogy, which up to now has following Emily as she fell in love with Sergei; but this time around we also get to see Aubrey's perspective.

I have to say that I liked this change, and the fact that it was very easy to identify who was talking - because Emily's POV is in first person and Aubrey's in third - and this made the pace of the book a little more brisk, which I really liked, plus I liked seeing these two girls with similar dreams but who are at very different stages in their lives, even though they are the same age. It was a nice contrast.

And, for the most part, I really liked the book. I love the world of figure skating, and I loved being inside it from two skater's perspective - though it was a bit eery since I remember both Torino and Salt Lake with perfect clarity, so I was, like, Whoa! sometimes when they talked about the games.

My one concern for the book came later on, and I can't really discuss because it goes deep into spoiler territory, but yeah, it made me question how realistic some of the things were.

But, on the other hand, I totally loved Chris and Sergei.

Bottom Line: Save for that thing, I really enjoyed and loved the book, it was easy to slide into the world and easy to read (I mean this in a good way) and it was a lovely visit with friends I hadn't seen in a while. I also liked that it wasn't as dramatic a story as the two previous ones, so it was just a lot of fun to read. In any case, I really recommend Fighting for the Edge for anyone who likes sports books, and skating books in particular.

Fighting for the Edge Two friends. Two dreams. One night that changes everything… Ice dancer Aubrey London scoffs at romance. She’s focused on winning a medal at the upcoming Olympics and uses that as her excuse to avoid serious relationships. But when she and longtime friend Chris Grayden are thrown together by unforeseen circumstances, Aubrey finds herself questioning everything she's ever known about love, complicating her life both on and off the ice.

Pairs skater Emily Petrov embraces romance. She and her husband Sergei still act like honeymooners two years after their wedding. As Emily’s coach, Sergei provides constant support while she prepares to challenge for gold at the Olympics. But Sergei’s support might not be enough to help Emily overcome the one challenge she never saw coming.

With the Games only weeks away, Emily and Aubrey are on the verge of realizing their dreams. But one snowy, stormy night sets in motion a series of events that will test them in ways they never imagined, giving them more to fight for than Olympic medals.
Amazon * Barnes & Noble

Praise for Fighting for the Edge "Emily and Aubrey's final challenge is Jennifer Comeaux's greatest victory. Both touching and suspenseful, Fighting for the Edge is a game changer that will have fans of the series giving both the characters and the author a standing ovation once they've turned the last page. If I could pass out medals, Jennifer would earn gold for writing my favorite romance of all time." - Jenna at Jenna Does Books
"Jennifer Comeaux puts you in the action, makes you smell the ice and hear the roar of the crowd during the nail-biting competitions, and she's a master at creating first love jitters in your stomach from the steamy scenes that are so hot without being explicit." - Christina Jean Michaels, author of Epiphany

Author Jennifer Comeaux
Jennifer Comeaux is a tax accountant by day, writer by night. There aren't any ice rinks near her home in south Louisiana, but she's a diehard figure skating fan and loves to write stories of romance set in the world of competitive skating. One of her favorite pastimes is travelling to competitions, where she can experience all the glitz and drama that inspire her writing.

When not working or writing, she is an avid follower of the sport of figure skating, travelling to competitions around the country. Those experiences allow her to see another side of the sport and serve as an inspiration for her writing. Jennifer is blessed with a wonderful family and many friends who have encouraged her to pursue her dream of being a published author.

a Rafflecopter giveaway
Open only to those who can legally enter, receive and use an Amazon.com Gift Code or Paypal Cash. Winning Entry will be verified prior to prize being awarded. No purchase necessary. You must be 18 or older to enter or have your parent enter for you. The winner will be chosen by rafflecopter and announced here as well as emailed and will have 48 hours to respond or a new winner will be chosen. This giveaway is in no way associated with Facebook, Twitter, Rafflecopter or any other entity unless otherwise specified. The number of eligible entries received determines the odds of winning. Giveaway was organized by Kathy from I Am A Reader, Not A Writer and sponsored by the author. VOID WHERE PROHIBITED BY LAW.
By Anonymous