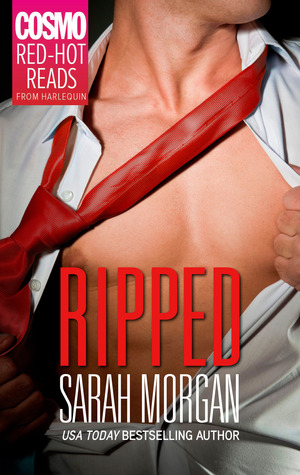 The Deal: Hayley isn't having a great day: she's at her ex's wedding, acting as a bridesmaid to a former friend - all to show that she's SO Over  the aforementioned Ex - and wearing the ugliest yellow dress in the history of Bridesmaid-hood. And Nico Rossi, the best man, is glaring at her from across the aisle with great disapproval.

Which doesn't improve once her too-tight dress splits, revealing that she wasn't wearing a bra and leaving her naked from the waist up. And forcing Nico to come to her rescue.

Nico and Hayley have never seen eye to eye... until they start making out out of the blue while he's helping her with her dress and chiding her for being at the wedding at all.

My Thoughts: Ripped was a really fun holiday novella. What I described above was just the very beginning of the story - which culminates on New Years's Eve.

I really liked both of them, particularly when they were together: they were nice, successful - I loved that Hayley was an engineer and dreamed of working for NASA one day - and had a great relationship with their respective siblings.

It was just an all- around fun book, and there is plenty of Christmas/New Year cheer int it, without it being too much or too focused on the holiday spirit. I do wish the story was a bit longer, but that's mostly because I would have liked to spend more time with these two.

And I'm really looking forward to the next book on the series, about Hayley's sister Rosie.

PS - Fair warning, though, the story is less than a 100 pages long (around 95)
By Anonymous