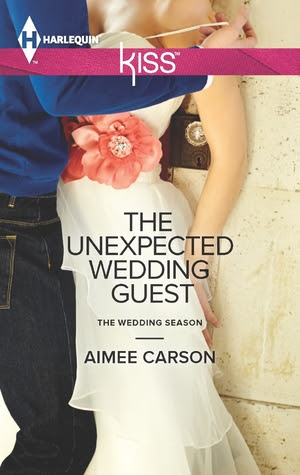 The Deal: With her wedding just a few days away, the last thing Reese Michaels wants is for her ex husband Mason to show up at her wedding venue and claim he wants closure about the marriage that imploded almost ten years ago.

But it all turns even worse when Mason strikes a quasi friendship with Reese's fiance Dylan, and Dylan agrees they both need closure and that they should use the next few days to find it.

Mason really just wants to set some things right between him and Reese, knowing that ten years ago they hurt each other very much, and that fixing that might help him find a new path in life. A former marine, Mason is still trying to adjust to civilian life, and dealing with the consequences of a traumatic head injury that put an end to his career and left him with a crappy short time memory.

Not that he's willing to admit that to Reese just now. Even if the chemistry between them is as strong as ever.

My Thoughts: Well, I really wanted to like The Unexpected Wedding Guest, it sounded kind of fun and I do like the second chance stories, but this one never finished making much sense. The more I found out about Reese and Mason's marriage the more I understood why they screwed it up and the less sure I was that the should be together... and the less I liked them.

Plus, they didn't have much in common (other than sex) and they acted very annoying. Oh and don't even get me started on Reese's friends, they drove me up the wall - there is this whole subplot of Reese and her three friends from college reuniting after years of not seeing each other that I just didn't care for, nor did I like any of the other girls.

Also, Reese's fiance was very much a cold fish, who seemed not to care either way what was going on between the ex-couple. And calmly accepted everything.

So, yeah, this one isn't a winner for me, but I kind of like the idea of the Kiss line anyway, so I guess I'll keep trying.