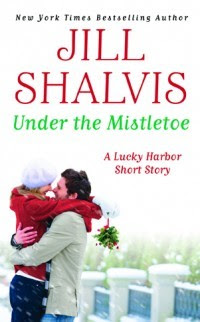 The Deal: Mia thinks that her relationship with Nick - a promising young attorney - is basically perfect, so she's shocked when a few days before Christmas she invites him to her aunt's wedding in Lucky Harbor and he says a categorical no.

Both Nick and Mia were given way as babies but Mia was adopted and grew up surrounded by love, and eventually developed a close relationship with her birth parents (Sawyer and Tara from The Sweetest Thing). Nick wasn't so luck and he still has a hard time committing to any kind of relationship.

Which leads to them getting into this big fight. A fight he regrets almost immediately and prompts him to follow Mia to Lucky Harbor to try to set things right.

My Thoughts: Let me start by saying that I'm a person who enjoys novellas, okay? I think that when they are well done are wonderful little morsels of awesome.

Sadly, I don't think Under the Mistletoe was very successful. I kind of already had a sense of who Mia was supposed to be because of the previous book, but for someone who claims to be okay with the whole adoption thing, she still bases all her self-worth around 'being picked'. And Nick was said to be this very mature guy, but he didn't act like it. They are both supposed to be in the early-to-mid 20's but act like 15 year-olds often enough. Plus, the Mia from the Sweetest Thing seemed a lot more mature than this one, five years later.

It sure was nice to see the couples of the original trilogy again, but I didn't care for the main story. More than in love Mia and Nick seemed to be in lust and the way things were resolved were just... too convenient to ring true.  And Carlos? (Mia's former boyfriend-love-of-her-life? yeah, his place int he story made me go Oh, really?)

I know I love Lucky Harbor and that's probably why I'm being hard on this story. Is it horribly written? nope, but it ain't all that great either.