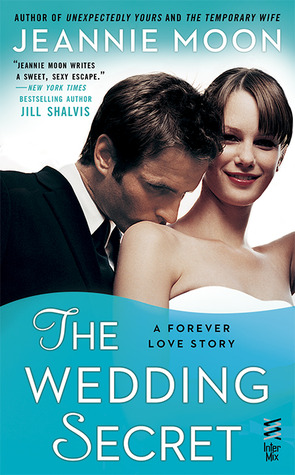 The Deal: Harper Poole has never done romance well, and she certainly isn't looking for a long-term relationship when she hooks up with pro baseball player Kevin Rossi at his sister's wedding.

Harper has plenty to keep herself busy with as the right-hand woman of the CEO of a software company (who also happens to be married to Kevin's other sister), but after a few dates she almost feels like she is in a relationship, until she suddenly pulls the plug on Kevin and he takes a contract to play across the country.

A year later, Harper has had a baby but hasn't told anyone who the father is and is trying her best to balance work and taking care of her daughter, when she suddenly runs into Kevin at a work event and realizes she shouldn't have kept him in the dark about their daughter for so long.

But when she tells him, things don't go as expected.

My Thoughts: The Wedding Secret is my second time reading Ms Moon and I can say that I liked it better than The Temporary Wife but it was far from perfect. See, both Kevin and Harper are quite nice and Harper has an interesting life and backstory, as she isn't the rich, trust fund type her Harvard education would suggest. She has many layers and I liked getting to know her.

She knows she messed up and tries to make things right. Kevin isn't a bad guy per se but he is very insensitive at times and acts like a baby sometimes. So do the rest of his family, they are so offended Harper didn't tell them who her baby's daddy was and treat her badly as a result (it even jeopardizes her job, at which she has never been anything but efficient, because her boss' wife, Meg, gets mad at Harper).

It just seemed really silly to me. And it really bothers me because, having read a previous book in the series, I know all of those people who got mad at Harper had far from perfect records, but got very judgy against her very fast.

Other than that is actually a very readable book.