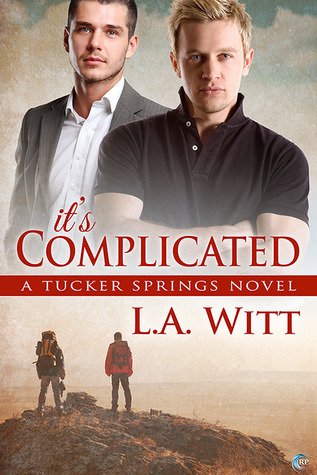 The Deal: Brad and Jeff have been together on and off for almost two years, and after their last break up resulted in Brad moving out of the house they shared, they want to take it slow and really make a go of things this time around.

Not that it will be easy, Jeff (who is bisexual) still works with is ex-wife Christine in the business they own together, one that it's very demanding on his time. And just when it seems like Brad and Jeff are headed in the right direction, Christine announces she's expecting Jeff's baby, product of a one-night stand a few months before (while Brad and Jeff were On A Break). Further more, she wants to move back to Denver and live close to her family.

And suddenly, things are even more complicated between Brad and Jeff.

My Thoughts: So, we are back at Tucker Springs for It's Complicated and this time with Brad and Jeff (I think they were introduced in the previous book, but I don't know because I haven't read that). And I have to stay that for the most part I liked this story.

It was fun to explore all the things that could keep a couple a part when love wasn't the issue, Brad and Jeff love each other very much, but it's the rest of their baggage and responsibilities that keep them apart, particularly on Jeff's side since he's a workaholic who can't say no to his business; and Jeff just bottles up his feelings about it until they blow up.

That being said, it was a very uneven story. I mostly liked Brad and I was team Brad most of the way through because he really tries to be okay with the whole thing; but Jeff was quite jerky sometimes and Christine went between playing the victim to being kind of bitchy, and flipping back and forth all the time. She makes some very unilateral decisions and Jeff is swept up in them.

And by the end it seems like everything just comes together haphazardly with Jeff making choices he should have done a long time ago but that for some reason he just... didn't?

All in all, I do enjoy these books, but the plot of this one was a bit, well, not thin exactly but not as well develop as this hot-pot of melodrama could have allowed.