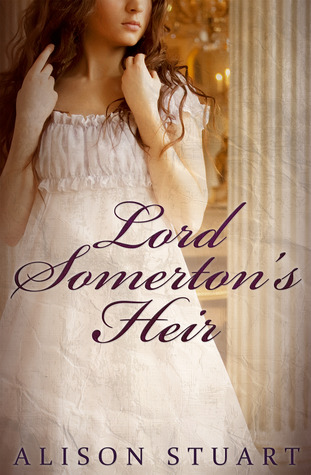 The Deal: Isabel, the now widowed Lady Somerton is on a mission: to locate her husband's next of kin and have him installed as the new Lord Somerton, and then finally move on with  her life. The last few years she spent married to Somerton were not happy, and Isabel is really looking forward to finally being free.

There is one small problem though, the man next in line to inherit the title is Captain Sebastian Alder, who is among the many injured following the battle of Waterloo.

Yet, Isabel finds him and brings him back to Somerton, where against the odds he pulls through. Sebastian might not be well equipped to be a Viscount but he's an honorable man and Isabel is happy to see his duty is done.

Until a series of events - among them the fact that there is little money left in estate, as Isabel's husband spent it all, including her widow's portion - keep her in Somerton, where things are rarely what they seem; putting her life and her heart at risk.

My Thoughts: I enjoyed Lord Somerton's Heir, which was a bit odd for me since for the most part the story played like a mystery and there were plenty of lose ends regarding Isabel's husband and what happened to him; some stuff was easy enough to figure out but a few caught me by surprise, which is always welcome.

The romance between Isabel and Sebastian is of the slow-burn kind, as they have both loved and lost before - Isabel married thinking she was pretty in love with her first husband, for example, only to have her dreams dashed as her marriage progressed - and they aren't eager to have that kind of emotional intimacy again.

Watching them fall in love was a little odd though, sometimes I felt like there were scenes missing that should have better informed what was going on, plus the pace wasn't great. Early on I had the distinct feeling that Isabel and her husband (whose name, I'm honest, I can't seem to recall) had been married for a couple of years at most... but then it turned out it was close to 10 years in actuality and that threw me too.

And there were many things like that, that just pulled me out of the story from time to time.

The story is compelling though, even when it goes into "over the top" territory, which it totally does.