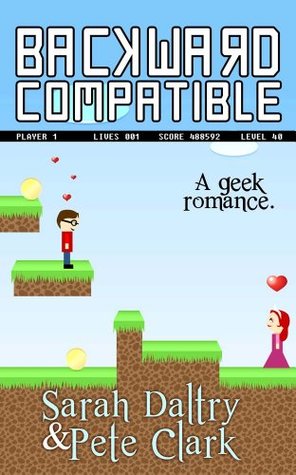 The Plot (courtesy of GoodReads):
Not too long ago, in a town that, depending on your current location, is either not super far or actually quite close... (insert Star Wars theme music here...)
It is a time of chaotic hormones.

Two nerdy gents home for winter break have discovered a female gamer at a midnight release.

During the break, the gamer trio manages to reveal the game's secret boss, a hidden enemy with enough power to destroy anything in its path.

Pursued by other gamers who want to be the first to beat this boss, George and Katie race to level up, and, in so doing, restore decency and sexual activity to their personal galaxy..

First Date: All right! Midnight release for a game! George and Lanyon meet Katie... and they clash (George has the last copy of the game he and Katie were there to buy). Lanyon is clearly going to be the coming relief, I can tell but I don't mind.

Second Date: That was the funniest and most awkward 'first date', Katie and George are two crazy kids but my kind of crazy for the most part. I don't like Jeff! Also, Katie, sweetheart, just because Jeff paid for your movie ticket and dinner, does not mean you have to let him slobber all over you and dry hump you at Denny's. Seriously! Plus, what are you doing going on a date with him?

Third Date: Oh, more references to gaming, less Jeff and more of Katie + George, their date-date was actually really sweet. Lanyon, you're creepy (you like to tag-along in other people's dates) but I like you, keep on being weird.

Relationship Status: I shall play this game again.

I don't suspect Backward Compatible will be for everybody, it's heavy on the gaming references and 'geek culture', everyone has a mouth that would put a trucker to shame and part of me always felt like I should be ofended but never did because I was laughing too hard.

Definitely a romance a little outside the norm, but a very entertaining one, I liked it a lot and, like I said, it made me laugh so much. And it had it's moments when it was actually very sweet, and I liked everyone in the book, really, except for Jeff.