Book Review: The Hero's Guide to Being an Outlaw by Christopher Healy 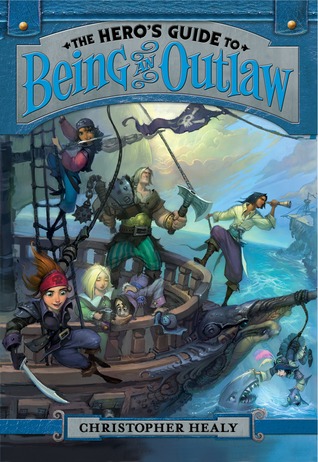 At First Sight: Several weeks after the end of their last adventure, the Legue of Princes finds itself in deep trouble once more. There is a rumor running amok all the 13 kingdoms: that Briar Rose is dead and that the Princes Charming and their friends are responsible for it. Soon, Liam, Duncan, Frederick, Gustav, Ella, Lila, Snow and Rapunzel are the prime suspects. More over, there is a huge bounty on their heads and they are being hunted down by various bounty hunters.

After various circumstances that bring them together and then split them off, we follow the boys and the girls, as they try to clear their names, going about it in very different ways.

But soon, both groups stumble into a bigger, darker plot.

Second Glance: Yes, I'm being vague again, but I just can't tell you what Hero's Guide To Being an Outlaw is all about without spoiling it big time, so I won't.

I always enjoy reading another adventure of the League of Princes and Outlaw was no exception, I love the gang - and I really liked seeing characters like Snow and Rapunzel having more page time and more time in their adventures, I like them both a lot. Also, Lila, I love Lila and her dynamic with Ruffian the Blue, if there was a moment when I got really emotional in this book (or two) it involved them.

On the other hand, there was a character I wished had a lot more page time because she's fun when she's around, but it didn't happen. Also, I have to say that by now, Liam is my least liked character of the bunch, I really liked Gustav in this one (he grew up a lot), and Duncan and Frederick have always been favorites, but Liam just... he didn't improve the more I got to know him, let's say.

Bottom Line: Hero's Guide To Being an Outlaw was a fun read, and it had its moments of pure awesome, but there were certain things that I didn't like as much as I had in previous installments. I still love the characters, and highly recommend the series, though. Book comes out on April 29th