Book Review: The Pursuit of Mary Bennet by Pamela Mingle 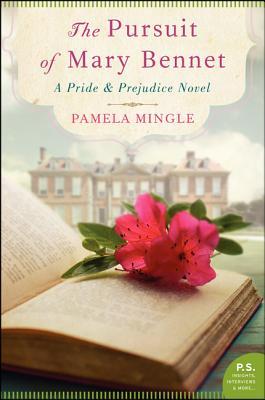 At First Sight: Used to being the ugly duckling of her own family, Mary Bennet spends most of her time alone. Knowing fully well that her sisters don't really like her, and that she has embarrassed her family on more than one occasion, Mary has started to change, becoming more thoughtful and acquiring some decorum. Even if she's still left alone most of the time -while Kitty is more often invited to visit their elder sisters Jane and Elizabeth - at least her relationship with her father is improving bit by bit.

But then, her youngest sister Lydia shows up heavily pregnant and announcing she has left her husband and -after some proving - admits she isn't 100% sure that her husband is even the baby's father.

Fearing for their reputation, Mary and Kitty are sent off to Jane's home. There Mary is in for more changes, Jane has noticed the changes in her and is showing her both approval and affection, Kitty - away from Lydia's influence- is a bit less of a brat; and one of Bingley's friends by the name of Henry Walsh starts to show some interest in her.

Too bad that Kitty has shown interest in Mr. Walsh as well.

Second Glance: For me, The Pursuit of Mary Bennet was a bit of a mixed bag of nuts. The story has a great rhythm and the pace is brisk. The story is told completely from Mary's POV and I think the author did a good job of capturing her voice: Mary is smart but naive, has lots of mixed feelings toward her family, is a little bitter but she's not unlikable. It's actually kind of sad to hear how badly she thinks of herself because her family has always marked her as the least favored child.

I even liked Henry Walsh for the most part, even though he was polite to the point of driving me mad, he even hurt Mary (unintentionally) to avoid being impolite to Kitty in public, which made him seem like he didn't have a backbone sometimes.

It was an interesting sequel to Pride and Prejudice, but it wasn't without it's issues -like I said, it was Mixed Bag of Nuts. Mary does put herself down a little too much, Kitty is very hurtful sometimes and the whole subplot with Lydia's daughter and now attached Mary gets was a little weird for me.

Plus, I often felt like something big was about to happen but then it never quite did.

Bottom Line: All in all, I do recommend The Pursuit of Mary Bennet, specially if you're a fan of Miss Austen, and enjoy retellings. The author does seem to capture the family and the story was quite interesting in it's own right.