Book Review: Once Upon a Prince by Rachel Hauck 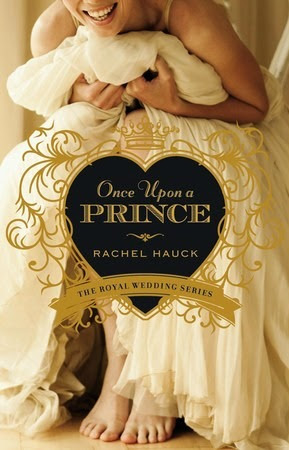 At First Sight: It was a really bad day for Susanna Truitt when she first met Nate. She had just broken it off with her marine boyfriend whom she had dated for 12 years while they both went to school and he was deployed.

So, Susanna wasn't at her best, but meeting Nate felt like a good thing, as she tried to process what she really felt about the break up.

And then Nate just kept showing up, almost like a knight in shining armor, each time she needed rescuing, help or just a friend.

But Nate was more than just a tourist on St. Simon's island who liked to help out at Susanna's parents' restaurant. He's actually Prince Nathaniel, heir to the throne of a small european country and he has plenty on his plate.

But he likes Susanna, and he likes being with her and feeling useful, so he stays around, supporting her and helping her... until the facts of his life start to come to light, complicating all sorts of things.

Second Glance: Once Upon a Prince was sweet. I liked the characters and I liked the story. For a lot of it, it felt like there were real complications and impossibilities for Susanna and Nate to get together, no matter how perfect they sounded for each other - and they did, from the start but I'll get back to that - and that was good for tension.

The problem was that it went on for too long for how things ended, I don't wanna say more on it because I don't wanna spoil, but yeah, the book felt kind of long after a while. Like I kept hoping the pace would pick up but it's a slow-burn kind of book and it's not rushing for nobody.

Also, Nate and Susanna are kind of too perfect together, too in sync from the start, and I would have liked to see more spark between them. A bit more tension that was internal rather than external. I know not everyone might feel this way but I did.

Finally, the book is Christian Romance, I wasn't aware of it and it wasn't annoying-annoying in the way some Christian Romance books can be, but you could never forget it was CR and just enjoy the story.

Bottom Line: Once Upon A Prince was a really enjoyable read, all in all, sweet and cute, but it wasn't a home-run for me. Still, it was cute and fun.