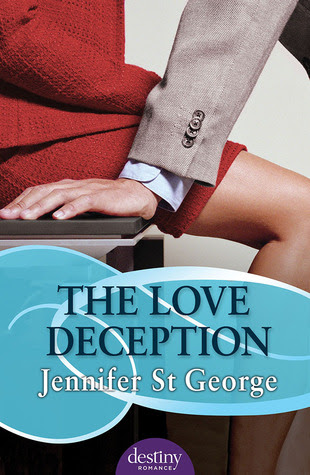 The Deal: Felicity Carter didn't plan on waking up in a strange bed a few days before her big job interview, let alone realizing that the mysterious owner of said bed was his would be boss Damon Fulbright.

But so it happens, and now one is more surprised than Felicity when Damon and his partners actually hire her, sure, she graduated from a top law program with honors, but Damon doesn't seem to like her all that much - you know, for someone who had her basically naked in his bed just a few days before.

Felicity doesn't care about Damon's animosity, though, she's at the firm on a mission: to help her wrongly convicted father in his last appeal trial before it's too late, even if she does have to keep her true identity a secret.

The appeal is being lead by Damon, so Felicity soon finds herself working close to him while they both battle the attraction they feel for each other.

My Thoughts:
The Love Deception wasn't my favorite Destiny Romance that I've read, I'm sad to say. The story is simple enough, the writing isn't bad but it lacks a bit of spark.

Separately, Damon and Felicity are nice, I could even believe they would make a good couple, but they got caught up in so many hang ups and half secrets. Damon has a pretty big reason to dislike Felicity on first impression (he finds her falling out drunk outside a club), but he carries that against all evidence for far too long; and then suddenly everything gets fixed in one spectacular stroke of coincidence that was too much.

Felicity was easier to like though she too gets caught in her secret, and at times they seemed pointless.

The Love Deception is not a bad story, but I've seen better from Destiny.