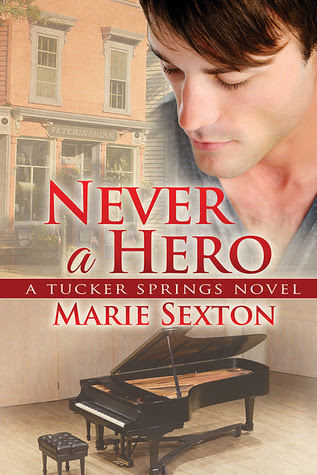 At First Sight: Owen Meade is shy and lives the life of a recluse, working from home and avoiding interacting with others as much as he can. He's gay, stutters occasionally and has a congenitally amputated arm, and he has a mother who has always made him feel like all of these things are his fault and that he's actively ruining her life.

But then, Nick Reynolds moves to the apartment bellow him and decides he wants to be Owen's friend. Nick is confident and sexy, loves animals - he's a vet - and seems determined to draw Owen out of his shell.

Nick is also very reserved in some aspects, and much as he gives up a vibe of liking Owen and maybe wanting something more with him... he keeps backing away when things start to progress between them.

Second Glance: Never a Hero is the fifth book in the Tucker Springs series and this was a nice enough read. Both Nick and Owen were kind of hard to like at times though. Owen is VERY shy and insecure and once you meet his mom it totally makes sense why he's like that, but before that it's like "Okay, man up a little here, come on!!!".

And Nick is always sending mixed signals. Once you get t know what happened to him and why he acts like he does, he also makes sense, but at the same time he's a bit of a martyr.

They do, however, seem to bring the best of each other, which was nice. And I actually liked the relationship between Nick and his sister (who has a similar condition to Owen but who doesn't let it stop her) and how he's not blind to how abrasive she can be.

There were some small cameos by other people of the Tucker Springs universe, which was nice too.

Bottom Line: Never a Hero was a good entry to the series, it was a pretty entertaining read and it only took me a couple of hours to read it. I respect the book and the subjects it took on, but I kind of wish everyone would stop turning conveniently gay (if you have read this series you'll probably understand me, if not sorry, I don't try to be confusing), and that we got a story that was not love at first sight because that's what all the stories up to now have basically been.

Ps - Review copy provided by the publisher via Net Galley.
By Anonymous