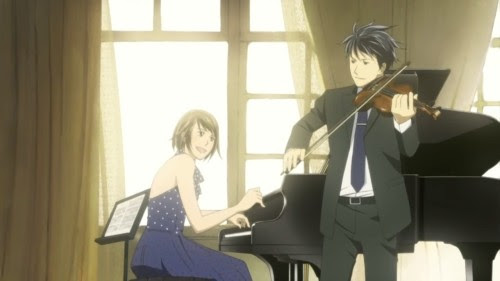 Sinichi Chiaki is an arrogant music student majoring in Piano, he's really good and looks down on his fellow classmates for the most part, choosing to stay aloof and apart from them... until his piano teacher pairs him up with Megumi Noda, known simply as Nodame, to play a duet.

Nodame is on the year bellow him, and she's sloppy and plays mostly in Cantabile style - by ear rather than reading the music - she's the total oposite of Chiaki, but makes lovely music. After that first time playing together, Nodame and Chiaki realize that they live in the same building and from them on there is no tearing Nodame apart from him.

Chiaki finds himself reluctantly looking after Nodame and getting pulled into her crazy schemes, and slowly opening up to his classmates and sharing his talents, and his secret dream of becoming a conductor someday - even if he is kind of stuck in Japan because he can't get on planes or boats due to really bad accidents he was in as a child.

Nodame becomes his biggest cheerleader and they slowly form a relationship. Meanwhile, Nodame is finding her drive to play piano, rather than just having fun with it.

Nodame Cantabile spans over three seasons (1 of 26 episodes and 2 of 13), telling the daily lives of Chiaki and Nodame as they find their way around their music and to each other. They are a lot of fun together: Nodame is all crazy and impulsive and Chiaki is very rigid and dependable. At first, they clash a lot (Though this bothers Chiaki a lot more than Nodame) but as the time passes they become each other's rock.

Nodame is Chiaki's biggest fan and wants to see him do well. Chiaki wants Nodame to live up to her potential because he wants to be able to listen to her forever. And it's good too see them grow. Chiaki slowly starts to find compassion to go along with this talent and drive, and Nodame finds her drive to compete rather than just mess about with the piano because is fun.

Both of them have their moments of incredible density where they can't see what's right in front of them, but they work it out eventually.

Also, the series covers about four years of their lives, both in Tokio and in Paris (which was pretty nifty) and they just let the music play for these long stretches of time and it's lovely.