Book Review: All He Ever Dreamed by Shannon Stacey 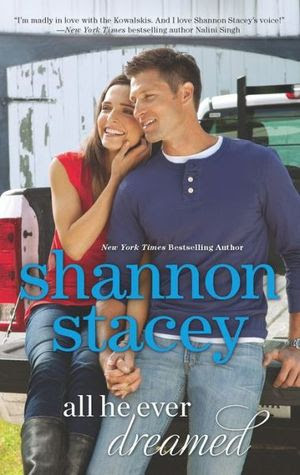 At First Sight: Josh Kowalski has spent most of his life looking after the family business: The Northern Star Lodge. While all his older siblings left their home town and went to do whatever they wanted, Josh was left working at the Lodge and struggling to run a profitable business.

After the Lodge took a bad turn and his siblings were forced to take a good look at the situation and realized that they had basically walked away and left their youngest brother to deal with it all, things started to get a little better and Josh began to see the light at the end of the tunnel: he was going to be able to leave town and figure out what he wanted to do with his life.

So, starting a relationship with his best friend Katie just now seems like really bad timing, but after years of unrequited love on Katie's side, suddenly they are together.

The problem is that Katie doesn't want to leave, and Josh is still planning to...

Second Glance: All he Ever Dreamed is the sixth book of the Kowalski series and I can sum up how I felt about it in one word: MEH! This was supposed to be a grand story that had been building up since book 4 (All He Ever Needed), Katie and Josh have spent the better part of the last 20 years dancing around each other, Katie is really in love with Josh and the whole town knows it except for him.

Suddenly they start a relationship. I know I'm supposed to think that it was inevitable - Katie moves into the Lodge to help her mom Rose (the lodge's long time housekeeper and second mother to the Kowalski clan), they are are spending a bit more time together and Josh realizes that yes, she is a girl -but, really? well, I felt like things just started between them without any real rhyme or reason.

And, by the end, I still fet that they were in a relationship just because they were there and (START OF SPOILER ZONE, highlight to see) that Josh comes back to town and gets back with Katie because he doesn't figure out what else he could do. I never felt that coming home was his dearest wish, it was just that he went out into the world and didn't find anything he liked more, but not in a good way, it was an "Oh, just as well! I know I threw a temper tantrum to get out of there but, c'est la vie". (END OF SPOILER ZONE)

Bottom Line: "Meh" is really the best way I can describe this book. I liked the characters, writing wasn't bad but I didn't really find myself rooting for Katie or Josh or Katie and Josh, I wasn't really invested in the story. I still like Ms. Stacey's style and I'm looking forward to Liz's book because it sounds like it could be great, but I found All He Ever Dreamed just a bit too bland.