Book Review: Put Me Back Together by Lola Rooney 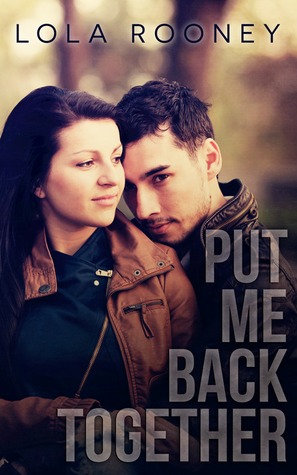 At First Sight: Katie Archer is happy to spend her days hiding in her apartment and only leaving for class or to go to the Dairy Queen, she's more than okay leaving the partying and the full college experience to her twin sister. All she wants is to be left alone to wallow in her own guilt over something she can't bring herself to tell anyone.

Isolation is all fine with her, thanks.

That is, until she meets Lucas Matthews, a legendary womanizer and former basketball idol of Katie's university, who has spent most of the last semester in relative obscurity, avoiding people almost as much as Katie.

Katie would be fine if Lucas ignored her too, but that doesn't seem to be in his plans. And though part of Katie is kind of glad, she also knows that there is no way she's outrunning her past, which is coming to catch her soon.

Second Glance: Is books like this that give me the fury, I swear. Plus, books like these are one of the reasons why I don't like New Adult in general.

Katie was way too neurotic to ever be a semi-functional adult, and believe me, I would know as neurotic is my middle name (it's actually Marisol, but why split hairs?). But she and Lucas actually have a pretty good meet-cute. I like Lucas okay enough, he had the brooding thing going for him and he was almost always nice to Katie.

But after this initial cute meeting - and a kitten - things go south fast. Katie is keeping a pretty big secret and beating herself about, and everyone in her life - except for Lucas - is looking the other way, while still telling Katie off because of her erratic behavior, without ever looking at the source.

The source, as it turns out, it's something very dark, almost so dark part of you thinks it HAS TO BE a parody or something, because, really? it was just too much. It was like this book had a personality crisis, and I'm sad because I kind of liked the beginning, but the more I got to know Katie and her secret, the least interested I was in her, and I actually started to think she was kind of dumb.

Plus, Lucas never evolves beyond being the "perfect", overprotective boyfriend for Katie.

Bottom Line: Put Me Back Together isn't a winner, it has some promising traits but it doesn't know how to handle the dark-subject matter that it bends over backward to shove in to the story.