Book Review: We Were Liars by E. Lockhart 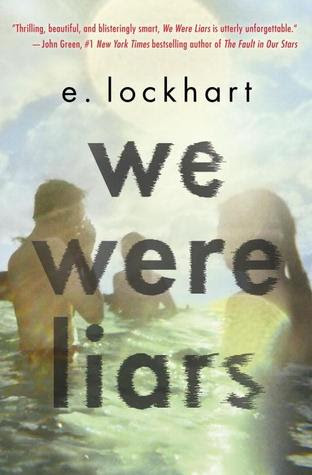 At First Sight: For as long as she can remember, summer means going Beechwood Island, to her grandparent's summer house, where all of her mom's family gathers each year for the season. Her family is relatively wealthy, well regarded and influential... and they like it that way.

Candance mostly loves these summers, where she gets to spend time with Mirren and Johnny, and Johnny's best friend Gat (who has been coming to the island almost as long as the rest of them). The rest of the time they live too far apart, but every summer they pick up right where they left and become the Liars.

The Summer Candance was fifteensomething happened, something that meat she couldn't go back for Summer Sixteen. But now, on Summer Seventeen and things will be as they always were. Or will they?

Second Glance: I'm being vague with the summary because I don't want to spoil anything for anyone who wants to read We Were Liars, but also because I don't really have much to say about this book. I didn't like it, the writing style was often stilted and oddly formal and like it wanted to be all lyrical but just sounded weird, like I often stopped myself to think "Who the heck talks like this?"

It has to do with what happened in Summer fifteen but it just annoyed me - I felt the mystery was kind of flimy and went on for too long, but had We Were Liars been better, I could have over come that - lets be honest, after years of watching Sherlock, House and countless CSI, mysteries are always kind of flimsy to me - but for me, with E. Lockhart, it always comes down to motive.

This "thing" that happens and why it happens... well, it was just about the stupidiest thing to me, and I know these were 15 year olds and impulsive and whatever, but the thing is that it doesn't read like what happened it was impulsive, it sounds like these four otherwise brilliant kids thought it was a Great Idea. Like, all the roads that lead them there are kind of dumb, and I can't imagine being fifteen and being in the same situation as them and say "Oh, yeah, that'll work." And I was and impulsive, often morose kid and I did some pretty stupid things in my day.

So yeah the motives this kids have so don't work with me. So, rather than loving this book it was like reading Frankie Landau-Banks all over again. Which I know a lot of people love but which I hated on principle - Frankie's goes ahead and messes with all these boys because they wouldn't let her join their secret club. You know what you do when that happens, Frankie? You go and creat your own damn club and make it more awesome!!!!! But I disgress.

Bottom Line: We Were Liars wasn't for me. I think some people might like it - same as with Frankie Landau-Banks - but for me it just fell flat. There were some bits of really good writing on it, but it was just too much to muddle through to get there. And I had no emotional connection to these people whatsover, largely as a result of the writing style.