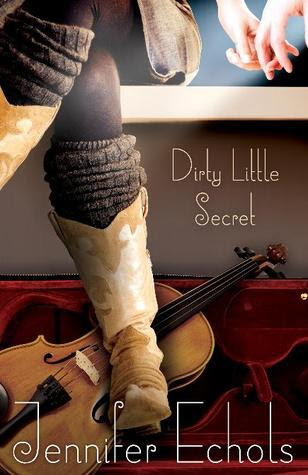 At First Sight: After a lifetime putting on a show with her younger sister Julie, Bailey is told that her music stardom dreams are over when a big record company offers Julie a solo recording deal. From then on, Bailey is forbidden from playing music and spends her senior year rebelling, until she's given an ultimatum - her parents won't pay for her dream college if she doesn't straighten up - and she's sent to live with her grandfather in Nashville for the summer.

Once there, it's kind of hard to escape music, and much as her parents and Julie's record label don't want Bailey playing, her grandfather helps her land an under-the-radar playing gig at the mall: playing background with different impersonators.

There she meets Sam, who is in his father's Johnny Cash act and who decides that Bailey's fiddle playing is just the thing  his high-school band needs to make it big.

But Bailey isn't sure she can or wants to play in a bad again, BUT she IS sure that her parents won't aprove.

Second Glance: Where do I start? Well, I'll start to say that it's not a bad book by any stretch of the imagination but, after hearing so much about Jennifer Echols and how awesome she is, this fell a little short and kind of flat.

It might be totally my fault, but the book didn't really come alive for me. Part of it was that, much as I agree that Bailey's Mom was awful and that Bailey got dealt a suck-y hand, I didn't care about her and I didn't connect with her, and I thought she was a bit whiny.

Yes, she has a raw deal but she also needs to get over herself - that's what I kept thinking for more than half the book. And her acting out (when we finally get to what's what she did) didn't give her any points with me.

Then there is the setting. I don't know country music, it's not a thing in my country so I half the time I didn't know what Bailey was talking about in that regard, and my only real reference on Nashville is watching Hellcats re-runs when there is nothing else on TV, so yeah, I was a little lost and all the details and minutia that Bailey supplied went over my head, really.

I liked some aspects of the book, I ended up liking Bailey's sister Julie somewhat and her grandfather and the people in the band Bailey joins - Sam, Charlotte and Ace were nice - but that's not really the stuff that makes me pick up a book again.

I do like the play on the title though, it applies in many levels.

Bottom Line: Maybe it was a case of too high expectations, maybe it was a cultural divide, I don't know, but Dirty Little Secret wasn't really for me. I think that other readers, more patient readers might like it but for me it was solid but not memorable.