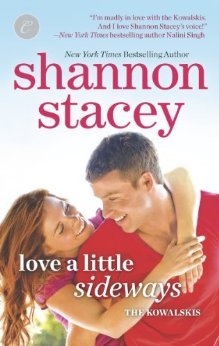 At First Sight: Having spent most of her adult life living in Texas, Liz Kowalski has finally made the choice to return to her hometown in Maine to be closer to her brothers, all of whom are settling down and forming their families there or near by.

She's not exactly ready for the first person she runs into once she's back in town to be police Chief Drew Miller. Drew is her brother Mitch's best friend, he was always around growing up, and last time she was in town they slept together at her brother's wedding. Which both neglected to tell to Mitch.

It was supposed to be a one off- type of thing but with her now living in town (and driving his car, since she crashed hers on her way into town), they are constantly running into each other, and the chemistry that lead them to sleep together before is alive and well, even if the whole thing seems a bit hopeless, since Drew really wants to marry and have kids, like, yesterday; and Liz just got out of a long term relationship that led her nowhere and is now trying to figure out who she is and what she's meant to do.

Second Glance: I'm going to start by saying that I really enjoy Shannon Stacey's writing, I enjoy her style and her characters; but I had a few big problems with Love a Little Sideways. The biggest one was the lack of conflict: Drew and Liz are both well into their mid thirties yet they run scared from her brother like they are in high school.

Yes, Drew wants kids and marriage and Liz doesn't right now, but he wasn't a jerk about it or tried to get her pregnant or anything like that, they aren't even together that much on the page - as in they spend more time pinning after each other than as a couple. Yet Liz is always freaking out about how Drew wanted kids. He does, it was stablished in a previous book but he wasn't really pressuring her into getting pregnant tomorrow.

So it really came across as a lack of conflict. Added to the fact that Liz kept wondering what she should do with her life like she was 18, or like being a career waitress wasn't good enough, not because she didn't like it or enjoy it or didn't make enough money, but because her brothers had gone to college and owned their own business.

And so she kept talking about being in Maine as if it was temporary, even though she wasn't sure she wanted to do anything else than what she was already doing. It came off as childish, something I have a hard time forgiving a thirty-something woman for when she's otherwise fairly capable.

Also, I like the other Kowalskis and it's nice to get a shout out here and there, but did I need a whole camping trip with the whole entire Kowalski family? No, I did not. Specially because it felt like a repeat of books past.

Bottom Line: Well, the writing is good but I think it might be time to say good by to the Kowalski clan. This could have been a perfectly lovely story with no conflict, which I would have preferred loads more to what I got which was a BLAND and silly conflict.