The Nightingale Girls by Donna Douglas 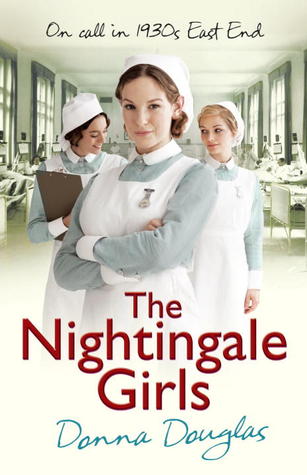 At First Sight: After seeing the nurses from the Nightingale Hospital run about in their uniforms and smart capes, Dora began to dream about becoming one of those nurses herself. Not an easy task as she comes from an improvised family in the East End, but she sees no other way to escape an awful situation at home.

When she gets her chance, Dora is amazed but the world of the Nightingale isn't exactly as she imagined, something that becomes obvious when she starts sharing a room with Helen and Millie.

Helen's mother is in the board of trustees of the hospital and likes to control everything that Helen does  - from how long her hair is to how starchy her uniform should be - and, as a result, Helen is extremely reserved and none of the other girls in the nursing program like her.

Millie - or Lady Camilla - left her aristocratic home and matchmaking grandmother behind to become a nurse, but she's constantly having trouble in her clases as the instructors don't like her rebellious and carefree attitude.

But, agains the odds, they start forming a friendship between them.

Second Glance: The Nightingale Girls sounded plenty fun when I first read the official burb, and it said that people who liked Call the Midwife (and we all know I do) would like this series. So I went in thinking it would be something like that.

But it really wasn't, I mean, it had similar elements to it but I have always found the over all tone of Call the Midwife to be overwhelmingly positive and hopeful, and there were times when Nightingale Girls was a little too dour and sad and, lets face it, depressing.

The writing was good and I grew to like all the girls eventually, they all had their demons to face, and I even liked the director of the nursing program. I just wish there had been a bit more fun in the story.

It did bring the 1930's hospital environment to life so that was a plus.

Bottom Line: The Nightingale Girls was okay. I won't be rushing to buy the next one in the series but I'm glad I read this book all in all.