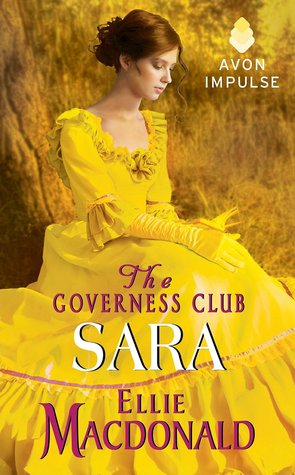 The Deal: Sara Collins is shy and yearns for a quiet life as a vicar's wife, only she can't tell anyone that as she is one of the founding members of the Governess Club. She doesn't love teaching as her friends do, but is willing to do anything she can to help them fulfill their dreams.

Nathan Grant is an ambitious young politician, who decided to spend some time in the countryside after his political career was derailed a bit, and it's then that the two met.

Nathan is adventurous and a bit wild, traits that should usually frighten Sara but instead call to her own wild side, the side of her that was suppressed by her overbearing mother when she was younger and that now longs to break free.

My Thoughts: Sarah's story short and for the most part sweet. She is an interesting character torn between her inner life and her outward persona, which she kind of hates a bit; but she was quite likable most of the time, which is good since this is a very character driven story.

Nathan was okay, but I never felt like I fully got to know him and a lot of things about him were left pretty much in the air. He could also be a real jerk sometimes.

The story works beautifully when they are together, though it can feel slow at times. And I'm not sure I loved the ending, but over all it was a good read.