Book Review: Two of a Kind by Yona Zeldis McDonough 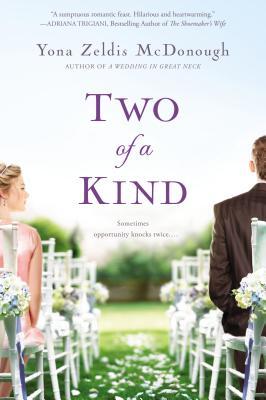 At First Sight: When they first met at a wedding, Christina Connolly and Andy Stern weren't off to the best start. Christina thought Andy rude and brusque, and Andy thought Christina was very reserved and icy.

But Christina, an interior decorator, couldn't turn her nose up at the opportunity to work for Andy - a very successful obi/gyn doctor - on his Upper East Side apartment.

Both are widowers (Christina for 10 years, Andy for about 2), and don't seem to have much in common, each struggling with careers and single-parenthood; but little by little they are drawn to each other, building on a physical attraction they can't help but to explore.

In the background are both their children, Christina's 14 year old Jordan who is an aspiring ballerina who puts too much pressure on herself; and Andy's 16 year old Oliver, who is using drugs to cope with his Mom's death and Andy's workaholic ways.

To Andy's surprise, Oliver likes Christina almost instantly and is happy to spend time with her, but Jordan is another story entirely as she can't seem to stand him; making their blending of their families seem impossible.

Second Glance: Two of a Kind was a pleasant surprise. I hoped I would like it, but I wasn't sure as I hadn't tried this author before and the beginning was a little slow - it takes Christina and Andy a while to get together.

But I loved this book for it's realism, even though they are vaguely attracted to each other at first, Andy and Christina don't jump in bed together, they become friends first and they have many fights - Christina is a bit oversensitive as a result of a childhood spent with a volatile parent; and Andy is used to let his mouth run off and has little tact when dealing with people other than his patients - yet they try to make it work, even when real life keeps intruding.

You also get to see a lot of their life apart, with Christina's struggling business and Andy's practice, and it's nice to see that they have real problems. I even liked Oliver and Jordan, even if Oliver was a bit of aimless and Jordan was a bit of a brat.

My one complaint about the book is that I would have liked to see Andy and Christina spend more time together.

Bottom Line: Two of a Kind was a very enjoyable read, full of characters that right true and sound normal. It's not exactly a romance novel, but it has a very strong romantic element and it had some very sweet moments - my favorite is when Andy tells Oliver that Christina is his girlfriend and Oliver has the best reaction ever.