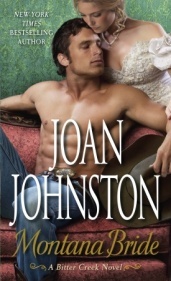 At First Sight: Hetty Wentworth is in a bit of a fix: her family's wagon was attacked after they were separated from the wagon trail due to something she did; and she has no idea where her sisters are or if they survived.

She feels responsible for the things that lead to this tragedy, so when two children, Grace and Griffin, ask her to pretend to be their mother and become a mail-order bride, Hetty lets those feelings of guilt and responsibility pull her into their children mad scheme, going with them to Montana to meet Karl Norwood.

Karl is used to being second best in everything, as everyone in his life (from his father to his brother and best friend) always remind him he's average in every regard. So he sent for a mail-order bride so he could start a family as he worked a logging project for his brother's company. He wasn't expecting said bride to be a beauty like Hetty or for her to be obviously lying about who she is.

Still, he met his commitment and he'll honor it, taking Hetty as his wife and Grace and Griffin as his children, and taking them to Bitterroot, where they'll be living.

Hetty is willing to do anything it takes to make sure Griffin and Grace are safe, even if she's not attracted to Karl, like at all.

Second Glance: I admit I requested and read this book mostly because I've read all the books in this series so far and I kind of feel compelled to finish it.

Thankfully, I liked Montana Bride a lot more than I liked the previous books, I don't know what it was, I just enjoyed this set of characters more and their story was very interesting, I liked Grace and Griffin, they were difficult children at time (well, Grace is almost fourteen) and had to do some very questionable things to survive basically alone.

But they love each other and they grow to love Hetty and Karl - who wins everyone over because he's a really decent person. And that's another thing I liked about Montana Bride. Yes, Karl is not much to look at but he's very nice and treats everyone kindly, yet he still has flaws and insecurities.

Hetty did a 180 with me, because at first I didn't like her much but I did like her toward then end.

Bottom Line: An enjoyable read, particularly if you like Historical Americana romances. This title will be published in January 2014