At the Movies: A Better Life 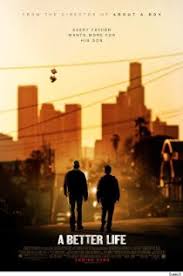 A Better Life tells the story of Carlos Galindo, a gardener in East L.A. and his son Luis. Carlos is an illegal immigrant that spends the majority of his time working, struggling to provide a better life for his son. For this, and even though he doesn't have a driver's license, Carlos decides to spend all his money buying a pick up truck, which will help him become his own boss rather than being at the mercy of other contractors.

So it makes sense that his world begins to crumble when the truck is stolen and he's left without means to work or move.

Meanwhile, Luis is struggling between his desire to become someone different to his own father and wether or not he should join one of the many gangs of East L.A.

And even though they haven't seen eye-to-eye lately, Luis and Carlos make it their mission to find the truck, hoping that'll change their fates.

A Better Life it's a fairy simple story of the struggles many immigrants go through once they cross the U.S. border trying to find a better opportunity that they had in their places of origin.

I went to see this mainly because I had heard it was pretty good, and because Mexican actor Demian Bichir got nominated to an Oscar for it. And I gotta say that I did like it but that it was slow at times and I struggled to find the heart of the movie.

Plus, when it comes down to it, comparing movies about immigrants, I realized I liked 2007's Under the Same Moon a lot more. So, I give this movie a B.
By Anonymous

Email ThisBlogThis!Share to TwitterShare to FacebookShare to Pinterest
Labels: 2012, At the Movies, B