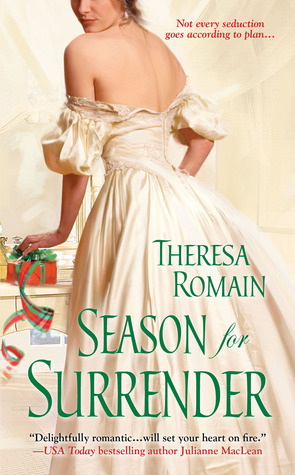 At First Sight: Louisa Oliver knows she was lucky, she survived her first London season and a broken engagement with her reputation intact - even though her erstwhile fiancé is now her brother in law, happily married to Louisa's sister Julia - but she's also in a bit of a rut.

She's not happy rusticating in the countryside with her big, loving family; and she doesn't want to keep being a third-wheel in her sister's marriage, and she also wants to have a bit of adventure... so when she's invited to the infamous Christmas house party of one Lord Xavier, Louisa agrees to go even though she holds Xavier accountable for the scandal that surrounded her family, what with the broken engagement and all.

What she doesn't know is that Alexander Edgewere, Lord Xavier has placed a bet on her: he has to convince Louisa to come to the party and stay for the duration. And he is not happy about it. Xavier finds Louisa quite charming and he likes her, but he has never backed down from a bet before and he's not about to.

Second Glance: I was excited to read Season for Surrender after having enjoyed Season for Temptation, and the book started well enough. I liked getting to know Lord Xavier he is complex and more than just a rake reformed - In fact, I don't think he's much of a rake at all, he just runs with that image people have on him.

We get a fair bit of his inner monologue and that was interesting.

I grew to like Louisa as well but I just didn't click with her the way I did with Julia. She's more stand-offish, which is weird considering we are following her point of view. But she has a good heart and wits and quite a bit of a back bone, which I admired.

The story itself is very simple, as it spans the two weeks of the house party. I did have a problem with the villain who was cartoonish and silly, and really why no one hit him sooner?

Bottom Line: Season for Surrender was still a good read and I want to read the next book in the series soon! I just didn't love it as much as I hoped I would .