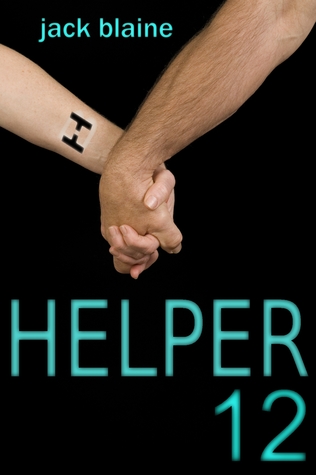 At First Glance:
Helper 12 - or Benna as her name turns out to be - works as a BabyHelper in the Pre-Ward, where the babies spend the first few months of their lives, before being assigned to different jobs and raised to serve that purpose. Her life is hard: she works long hours, has basically not rights, and lives in a rundown apartment complex yet is basically as helpers like her have no right to form families and such.

Yet, Benna takes comfort in three things: her friendship with a fellow baby helper, Kris; the bond she sometimes forms with the babies in her care, and her art. Even if that last one thing could get her killed if she's ever found out.

When one of the babies in her care is illegally "adopted" by a wealthy family, Benna finds herself sold to the same family (she's meant to act as a nanny to the baby) and immersed in their world.

It quickly becomes obvious that everyone at the Sloane's house is keeping secrets, particularly Thomas - the family's eldest son - who seems to have a big bone to pick with his parents, and who is very drawn to Benna none the less.

Second Glance: Helper 12 starts as many other dystopian books do: something happened in the future and the world is now divided between Haves (Society members) and Have-nots (Laborers). We are quickly explained some of the ground rules: Society members have all the rights, money and power, they can study whatever they want and basically be whatever they want (or almost, but more on that later). Meanwhile, Laborers get "tracked" and assigned into a profession depending their natural characteristics and abilities.

Once you get you assignment, you can't deviate from said assignment without paying some pretty dire consequences.  We are not told why things are the way they are, but the world makes sense most of the time.

Our titular Helper 12 is thrown into an unusual situation, as she learns that even being a member of "Society" with an actual family unit does not mean your life will be any easier, specially if you are different.

The book itself is pretty easy to read and what I like to call Dystopian light - there is not lots of details about the world, but it's not hard to understand what's going on, and it doesn't have ant overwhelmingly dark aura that some dystopians have - my one problem is that we aren't always told or shown why things are they way they are.

You can pick up a lot of things in the context but no clear explanations are ever given. And the ending is a bit contrite, but I actually enjoyed reading this book while I was doing it. I'm not sure I'll read it again soon, but I liked it all in all.

Bottom Line:  If you kind of like dystopia but aren't willing to go into some of the darker and gloomier books, Helper 12 is a good read for you. Is very readable, and you're never bored with it even if it is a bit predictable in some regards and the world could use a bit more developing (Though, I hear this does happen in the second book Twitch).